How to Grow Microgreens with Hydrogen Peroxide Spraying

We all know what are microgreens, right? These tiny greens are quite popular as ingredients of salad or food garnish due to their rich nutritional properties.

You can easily get them at big superstores. But let’s be honest, store-bought microgreens can never compare to the freshly grown ones.

While there is a possibility that you can face some setbacks while growing microgreens, using proper measures can minimize the possibility of such occurrences a great deal. One such method is applying Hydrogen Peroxide to grow microgreens.

Now, let us have a detailed discussion on how you can grow microgreens with Hydrogen Peroxide spraying to help you get a clear idea of this method.

Before we begin discussing the cultivation method of microgreens with hydrogen peroxide, we should have a clear idea about it. Hydrogen Peroxide or H2O2 is a chemical compound made of 2 hydrogen and 2 oxygen atoms. It is one of the most widely used disinfectants due to its antifungal and antibacterial properties.

Therefore, it is a popular ingredient in disinfecting wounds and pre-disinfecting items. This oxidizing agent has one extra oxygen atom than water.

When applied to growing crops at a highly diluted level, it works as an organic fertilizer and disinfectant for plants due to its inherent characteristics. Pretty impressive, right?

Growing Microgreens with Hydrogen Peroxide – What will you need?

One more thing. While growing microgreens at home in small quantities is relatively easy and cheap, you still will need some items to grow them.

Still, anything will do as long as the drainage capacity is adequate. There are no rules about the size, but the depth should not exceed 2 inches.

Remember to be careful while selecting your potting soil/medium to plant with Hydrogen Peroxide. The potting soil used to grow microgreens is different from regular potting soil and should be fine-grained. If it has too many large particles like garden soil, then the roots won’t have much room to grow.

It is best to use a soilless medium to grow microgreens to avoid soil-borne diseases. Here is a simple method of making a potting medium. Just mix the following ingredients into the described formulae.

Now use a mixer to make a fine-grained mixture. Done!

You can water more evenly without exceeding the limit using a Rechargeable Automatic Spray Bottle.

If you can expose the microgreens to direct sunlight for 4-8 hours daily, there is no need for glow lights.

But if you grow them in an enclosed room, make sure to have enough glow lights to provide enough light for the plants.

For germination, most of the microgreen seeds need around 70°F temperatures. If you live in an area colder than this temperature, you might need to buy Seedling Heat Mat to ensure the optimum temperature.

To help your greens grow and prevent mold, using hydrogen peroxide is extremely effective. The most suitable variety for horticulture is food-grade 3% H2O2.

You only need to mix them in water to use them. You can even add white vinegar for a better result. The ratio to the solution (Water: H2O2: Vinegar) is: 50:10:1

If you don’t have vinegar, no matter. At that time, make the solution by adding 1 TBSP H2O2 in half-liter water.

While there are tons of benefits of microgreens, when they are molded, they become toxic. And that is where the H2O2 comes as a lifesaver. So, let’s begin on how to propagate microgreens with hydrogen peroxide, shall we?

Selecting a Location for Microgreens

Before everything, you need to select a location for your growing project carefully. The chosen area should have excellent drainage capacity, a low humidity level, proper temperature, and air for microgreens.

This is important because in a humid environment without sufficient airflow, your seeds are vulnerable to mold. And the proper temperature is essential for germination.

Many mistakenly believe that sunlight is a must for seed germination, but that is wrong. You will need light, but mostly after the seeds sprout.

Preparing the Seeds and Seedlings with Hydrogen Peroxide

Prior to planting your seeds, it is best to get them ready to ensure proper germination. You can directly plant small seeds. But when it comes to larger seeds or seeds with hard shells like sunflower, soaking them for some time can increase the rate of germination.

Generally, seeds need to be soaked for 8-12 hours (overnight). But to be safe, you can check the packaging or the internet to learn about the proper soaking time. After all, if you overdo it, you run the risk of drowning them.

We suggest that you soak the seeds in the pre-prescribed H2O2 solution regardless of the seed variety for 10 minutes before planting them. Afterward, rinse and soak them in water overnight. Then re-rinse, dry, and they are ready for planting.

Through this method, you will be able to reduce the risk of mold growth. Also, as H2O2 has an extra oxygen molecule than water, it helps the seeds to absorb water and thus increases the possibility of successful germination.

Using H2O2 to Prepare the Bed

Now that we have prepared our seeds let’s start with the seedbed. For that, first, let’s wash the seed trays or containers with 3% H2O2 mixed water to disinfect them and kill out all the germs and bacteria.

After the trays are washed and dried, get ready for putting in the soil. But before that, pour two cups of water into the tray.

Then evenly spread dry potting soil in the tray. Evenly fill up the tray until it reaches the quarter or half-inch to the top. Afterward, lightly compress it to smooth the surface.

Through this method, the water will move upwards. Studies show that this way of pre-irrigation can reduce the possibility of root rot.

Remember, the seed density for microgreens should be packed, but not enough to stifle the growth thoroughly. Generally, it is enough to have a 3mm to 6mm spacing between the seeds, but it is not mandatory.

Now gently sprinkle the seeds to cover up the entire surface of the soil. Lightly coat them with some soil. But make sure not to bury them thoroughly lest you stifle their access to air.

According to studies, the illusion of being buried under the soil is helpful for seed germination. So, you should put try to provide them with such surroundings.

It is not too complicated. You just need to stack the trays one over another to cover and put pressure upon the seeds, that’s all.

As for the topmost tray, put an empty tray with some weight over that one. This will create the necessary illusion the seeds need for a better chance for germination.

Now put the stacked trays in a humidity-free, warm area and wait. Don’t forget to water them daily to keep the seeds moist. The seeds will take around a week to germinate.

The greens have started to emerge; it’s time to provide them with the best care so that they keep growing well. The first thing you need to do is expose the seeds to the proper level of light and temperature.

Move the trays near the sunny area of the house or under an LED light. Best to place them on the veranda or near a windowsill to ensure airflow.

Don’t forget to occasionally (twice/thrice) water with a spray bottle. Remember, water enough to keep the soil moist, but not soaked.

The Effect and Use of Hydrogen Peroxide on Seeds and Seedlings (H2O2 as a Disinfectant, Pesticide, and Fertilizer)

Also, don’t forget the most crucial part of your microgreens’ care. And that is to spray the leaves and stems of the greens with the pre-prescribed water-H2O2 solution once a week. Why?

Because the diluted H2O2 will play a significant role in your microgreens’ development.

First of all, we know that H2O2 contains more oxygen than water, and it easily dissolves in water. Thus, when you spray the H2O2 solution, it oxidizes the soil and works as a plant nutrient. The increased oxygen also protects your greens’ roots from rotting.

Also, H2O2 is a very active chemical, and it releases its free oxygen atoms in the slightest incentives such as a change in light, temperature, etc. When it discharges its oxygen radicals, those radicals eliminate proteins and pollutions.

Due to this reason, H2O2 kills molds, bacteria, germs, and pests through oxidation with ease. In the end, it all comes down to its ability to oxidization.

When your microgreens get 1-3-inch tall and open a set of true leaves, that’s when you know that they are ready for harvesting.

Simply use a sharp, H2O2 disinfected scissor to clip them just above the soil line. Rinse 3-4 times, and enjoy!

How Long Will You Need?

Now, let’s see how long you will need to wait for your microgreens to arrive at your table, shall we?

So, after planting your seeds, you will need to wait for 10-21 days to have your microgreens at your table.

Don’t have so much time and patience? Don’t worry; there is a solution to your problem. Believe it or not, some products in the market called microgreens kit can make your microgreens production way easier.

These kits come fully prepared with the microgreens seeds of your choice. The only thing you will need to do is adding water and occasional H2O2 solution spraying. Simple and easy!

Few Tips to Help Your Cultivation

According to Eicher-Sodo M., Gordon R., and Zheng Y., excessive use of H2O2 has a phytotoxic effect on microgreens. So, always use a diluted solution on your plants.

And this is how you can grow microgreens with hydrogen peroxide spraying. The procedure may seem time-consuming, but the result is worth it. And a significant portion of the thanks goes to our friendly hydrogen peroxide.

Don’t believe it? Try growing a tray without H2O2 treatment, and compare it with one grown using H2O2. You will see the differences yourself.

If you follow the guidelines in this article, you are unlikely to face any difficulties in growing them. And trust me; once you begin growing, you will see how great your hand grown greens feel compared to the store-bought ones. Simply incomparable! 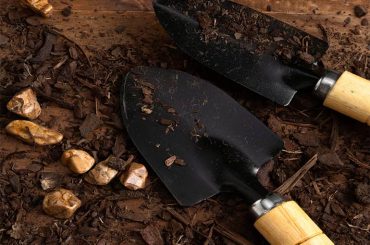 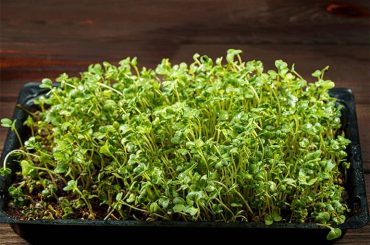 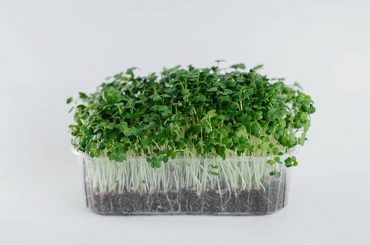